Cardboard Engineering is the method of choice for the ergonomic and efficient planning of industrial workstations. In the age of Virtual and Augmented Reality (VR/AR) this planning method is revolutionized by R3DT’s VR tool. Virtual prototypes replace mockups made of wood or cardboard, thus saving time and disposal costs.

As planners of industrial workplaces, production lines and special machines, everyone knows the terms cardboard and mockup. The elaborate models made of cardboard, wood or styrofoam in analogue Cardboard Engineering cost time and money and often have to be disposed of afterwards in a time-consuming and costly manner. With R3DT’s VR tool, many of these models can be saved and considerably more models can be created for testing in less time. Virtual prototypes replace real prototypes or are the only way to make them possible when there are no real prototypes, as in the construction of special machines. VR enables planning teams to work together even if they are physically far away from each other. Input from the client and users is also greatly simplified: during the planning process, they can use the VR tool and the Cross Connected® software to track the individual planning results and directly report back suggestions. 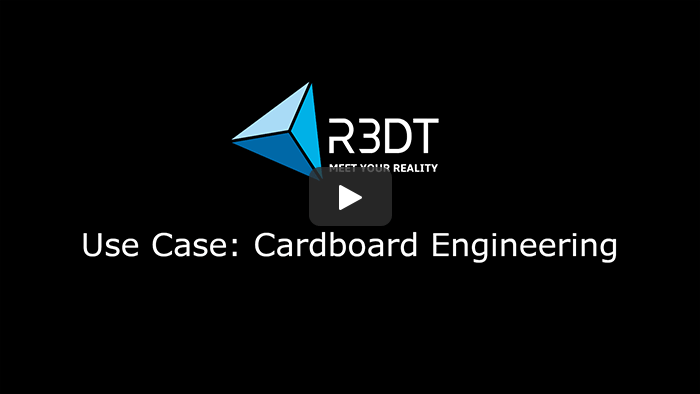 Since all processes are intuitive, industrial engineers arrive at the planning reality 4.0 with the VR tool from R3DT within a very short time. Please contact us, we will demonstrate the VR tool on the basis of your own 3D models and of course you can also book a training session with us.

R3DT’s software can be used, for example, to visualize production plants on a one-to-one scale: the user’s own hands serve as an aid, for example to bring objects closer or move them….
Read full article

In early planning phases, virtual prototypes are used to avoid errors that would otherwise be difficult to identify….
Read full article

“You yourself load your 3D CAD data onto a virtual platform, directly at your desk or in the meeting room. You can do this anytime, quickly and anywhere.”…
Read full article

With Virtual Reality: errors can be detected as early as never before. However, the decisive factor is the use of an easy-to-use tool….
Read full article

“The company use of Virtual Reality must be as simple as using a smartphone,” says co-founder Andreas Rüdenauer….
Read full article

With R3DT’s VR tool, companies can use their existing data in such a way that they can virtually experience their products on a 1:1 scale at the touch of a button….
Read full article

With the VR tool from the Karlsruhe start-up R3DT, which Stöber has chosen, entire systems can be simulated in the conception phase and experienced one-to-one using VR glasses. A simple principle with a big impact…
Read full article