The Virtual Reality (VR) tool from R3DT allows new ways in assembly process planning: anyone can work intuitively on virtual prototypes with their bare hands anytime, anywhere. This enables assembly processes to be simulated, gripping and assembly steps to be optimized and overall waste to be reduced. This saves a lot of time, money and increases work safety.

With the VR-capable hardware and the Cross Connected® software from R3DT, for example, the development department of Schnaithmann Maschinenbau GmbH can better consider the assembly processes of their customers when planning their plants. Already in the conception phase, developers and customers can use VR glasses to experience the systems and check them “as in real” with regard to ergonomic or maintenance characteristics. This enables detailed troubleshooting right up to design release. Since the handling of the VR tool is intuitive, no special training or instruction is required. Virtual reviews are possible spontaneously in on-site meetings or at physically separated locations.

To use the VR tool, the 3D-CAD data generated for the design are loaded into the software at the push of a button, usually within minutes. The designers thus have a realistic, virtual system at their disposal for further work at any time. Data volume in the gigabyte range can be handled without any problems and facilities filling the entire hall can be called up in seconds, walked through with the aid of VR glasses and, thanks to the hand tracking technology of Leap Motion, touched and used.

Advantages of planning with the help of Cross Connected® software 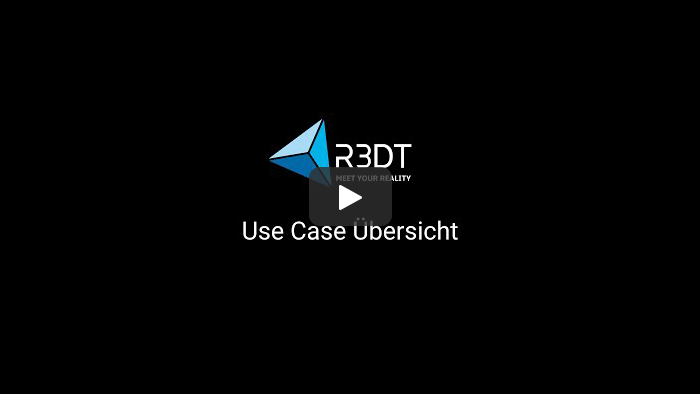 If you would like a demonstration of R3DT’s VR tool or if you would like to test the software with existing VR hardware and your own 3D data, do not hesitate to contact us.

R3DT’s software can be used, for example, to visualize production plants on a one-to-one scale: the user’s own hands serve as an aid, for example to bring objects closer or move them….
Read full article

In early planning phases, virtual prototypes are used to avoid errors that would otherwise be difficult to identify….
Read full article

“You yourself load your 3D CAD data onto a virtual platform, directly at your desk or in the meeting room. You can do this anytime, quickly and anywhere.”…
Read full article

With Virtual Reality: errors can be detected as early as never before. However, the decisive factor is the use of an easy-to-use tool….
Read full article

“The company use of Virtual Reality must be as simple as using a smartphone,” says co-founder Andreas Rüdenauer….
Read full article

With R3DT’s VR tool, companies can use their existing data in such a way that they can virtually experience their products on a 1:1 scale at the touch of a button….
Read full article

With the VR tool from the Karlsruhe start-up R3DT, which Stöber has chosen, entire systems can be simulated in the conception phase and experienced one-to-one using VR glasses. A simple principle with a big impact…
Read full article